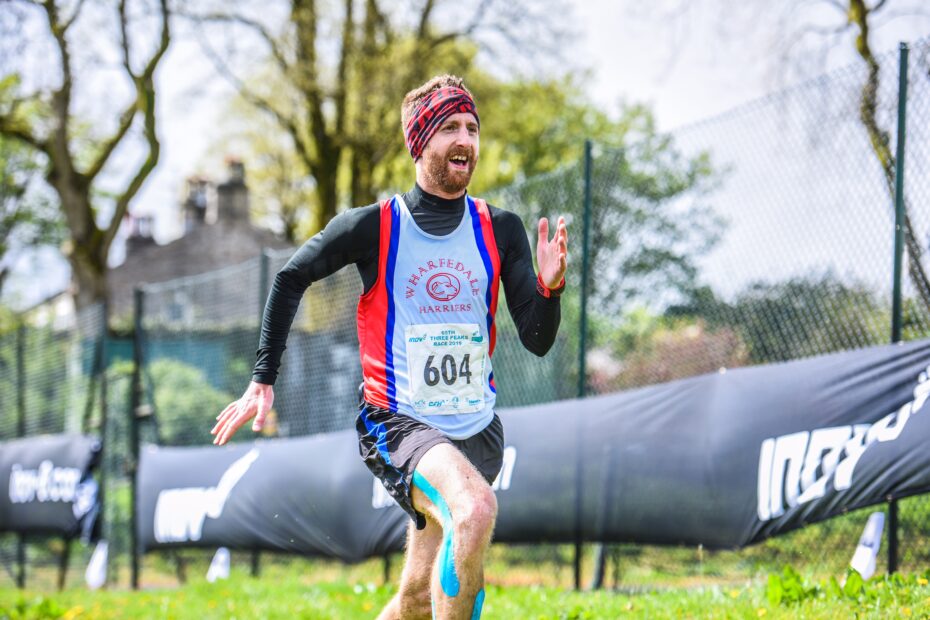 Racing. I am in no way a top class athlete, I’ve never quite hit the heights partly because I could never settle on one sport. I’ve been active and played sport all my life and I love it and part of the love comes from competing. Growing up with my two brothers cemented the competitiveness, the glory times and the brush it off and try again times. I rarely wanted to stop being active and that underlying engine of fitness finally brought me to running and the varying challenges.

The first race I ran was the Edinburgh marathon and it was purely a mental test in the end, nothing really competitive apart from the twenty or so times I passed the same person between mile 22 and mile 26, wobbly and broken. I still had the mindset to lift my legs for a sprint finish, a very slow and underwhelming sprint finish.

The first races I took seriously were the Lakeland Trails series, most of which I’ve done two or three times. I came 55th in the first one racing alongside my brothers and cousin Max. I remember my legs buckling on a steep point closing in on the end of Ullswater and my cousin Max powering up the hill past me. I spent the final part of the race gritting my teeth and trying to run him down whilst running out of race to catch him. I was so annoyed but buzzing from the effort and honestly impressed by Max’s pacing and overall effort. A few years later I got a 3rd place in the Autumn series of events and was getting regular top 10 finishes and it was that first race that had got me hooked. Those events fused the first element of racing that I love, the challenge of continuous improvement. I had a solid fitness foundation but loads to learn about pacing, nutrition, race prep and training. I just wanted to get better.

Many of the races I’ve taken part in are memorable for the battles, the mini competitions and head to heads. I grew up watching Steve Cram vs Seb Coe and Linford Christie vs Carl Lewis, iconic moments in athletics. It’s still disappointing that I didn’t turn out built for sprinting after watching the 100m first hand in Gateshead, I had dreams of flying down the track, light on my feet, shoulder to shoulder with the greats. The battles on the fells are no less iconic and even in the middle of the pack or a few minutes behind the leaders anyone can find themselves in a race against equals. It’s an opportunity to create you own mini iconic moment, a headline in your personal paper. In a run at Staveley I had a rollercoaster of a race with a fellow athlete who caught me and built distance on every climb only to find himself losing the lead on the descents. The race had a classic sting in the tail at the end with a tough sharp climb and, after wearing me down, he took a glance to the side with a slight smile and upped his pace away quickly gaining about 20m. I’d trained well for the race and it was one of the first times I took a mental hurdle over the pain barrier and thought “not today my friend, not today”. Gritting my teeth I held the gap into the steep part of the hill, I hit a rhythm and then started to close. Just closing the gap made me feel slightly elated and a smile grew across my face at the toughest point in the race. I crested the hill shoulder to shoulder as the chap looked across and then dropped his head dejected. I descended like a madman for the final kilometer and crossed the line with cramp and a big grin. I’d won whilst also coming 13th, the sun was shining and music was playing and everything had turned out rosy.

In touching distance of the elites

With every sport there comes the question, who is the best? When it comes down to an individual race, every participant wants to be as high up the leaderboard as possible. Only a few have the ability and chance to win. To watch the best compete is a privilege; to compete amongst some of the most talented runners in our country is a gift. Watching athletes excel and make a sport like fellrunning look relatively effortless helps me to understand what it takes to be on top of your game. Hours of training and having a sense of the hills and terrain to understand the courses and conditions accounts for part of the success. Being built physically with an heart driven engine and the power and drive in the legs beyond any sense of normality is what makes the elite stand out. Running the Ben Nevis fell race in 2019 was an example of witnessing the extraordinary. Finlay Wild won his tenth Ben Nevis fell race in a row. Running my first I was struggling to the top only to watch in awe as he floated over the scree and back down towards the finish. He finished 1 minute after I reached the top and if I hadn’t seen how he moved over the terrain with such certainty, precision and pace I wouldn’t have believed it possible.

Now I’m 40 I’m in the veteran category but I’m still determined to continue getting faster. I’m eyeing PBs and if it happens attempting the Edinburgh Marathon 10 years after my first race. If V40 top 3s come in then great, there’s often a beer for a prize in the smaller fell races but I’d rather continue improving and facing the mini battles with the hope that one day I could beat the elites, just not Linford, my shoulders aren’t big enough.

Running around home is pretty special at this time of year, nature is exploding back to life after a…

Most of my runs start from my door, especially over the last year or so. Thankfully I love where I l…

Why I run – Andy West

For the second guest post, another former PE teacher was keen to share his thoughts on why he runs. …

Tags:Why I run
We use cookies on our website to give you the most relevant experience by remembering your preferences and repeat visits. By clicking “Accept All”, you consent to the use of ALL the cookies. However, you may visit "Cookie Settings" to provide a controlled consent.
Cookie SettingsAccept All
Manage consent

This website uses cookies to improve your experience while you navigate through the website. Out of these, the cookies that are categorized as necessary are stored on your browser as they are essential for the working of basic functionalities of the website. We also use third-party cookies that help us analyze and understand how you use this website. These cookies will be stored in your browser only with your consent. You also have the option to opt-out of these cookies. But opting out of some of these cookies may affect your browsing experience.
Necessary Always Enabled
Necessary cookies are absolutely essential for the website to function properly. This category only includes cookies that ensures basic functionalities and security features of the website. These cookies do not store any personal information.
Non-necessary
Any cookies that may not be particularly necessary for the website to function and is used specifically to collect user personal data via analytics, ads, other embedded contents are termed as non-necessary cookies. It is mandatory to procure user consent prior to running these cookies on your website.
SAVE & ACCEPT